True to the motto "Back to the Future" (quote from Dr. Karsten Homrighausen, Berlin fire department - since there were electronic fire trucks 100 years ago), a press conference took place on November 15, 2018 in the offices of the Berlin fire brigade. There, the project "electric extinguishing and auxiliary power vehicle" (eLHF) with the responsible project partners was presented and the second phase of the project was heralded.

The project "Hybrid electric fire engine for the Berlin fire brigade", in short called "eLHF" is financed to 90 per cent from subsidies. In this context, the Berlin Program for Sustainable Development (BENE) deserves mention. The program is co-financed by the European Regional Development Fund, which directly supports the eLHF project through European Union funding. The total budget is 1.8 million euros and the project duration is limited to four years. (2018 - 2021)

In 2017, around 87,000 vehicle alarms were reported to the Berlin fire department, of these, approximately 2,500 alarms per LHF (fire fighting and rescue vehicle). Every LHF thus covers up to 15,000 km annually in the inner city area. The main tasks of the fire brigade are the transport of emergency services and fire-fighting equipment. In addition, a powerful fire pump and a utility power supply must be provided at all times. Since the vehicles are so far equipped with diesel combustion engines for driving and for the use of auxiliary drives, this leads to high pollutant emissions and in addition to a considerable noise pollution. 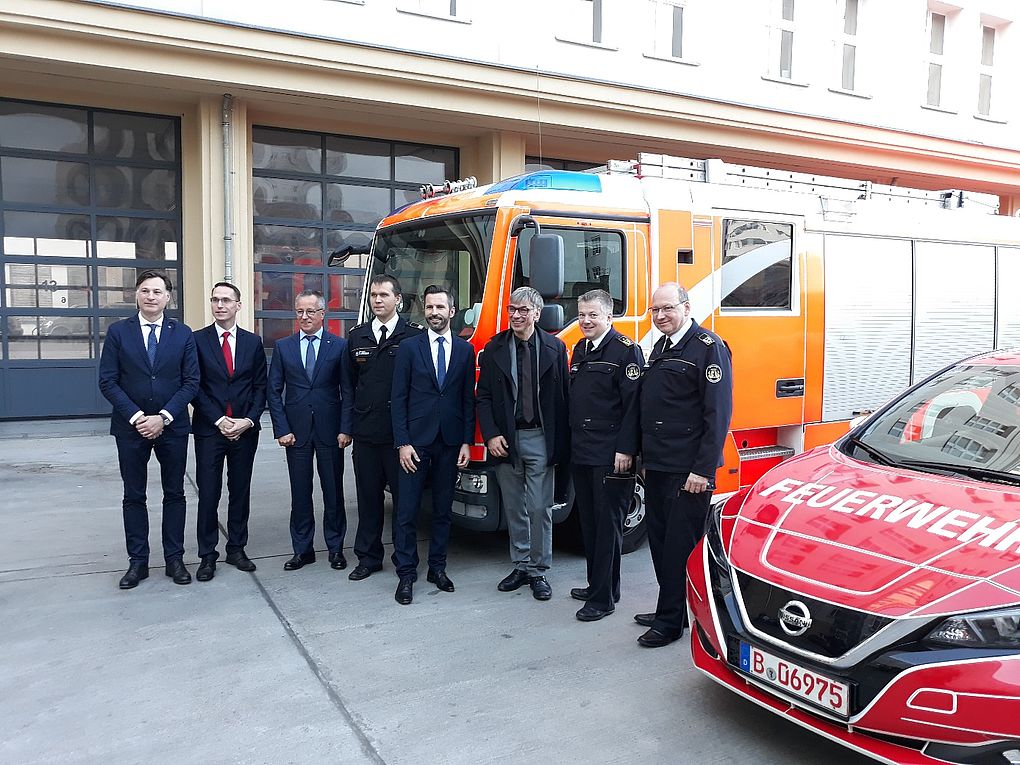 The eLHF project has far-reaching goals

The Berlin Fire Department has therefore set itself the goal of contributing to climate protection. Among other things, this includes the reduction of greenhouse gas emissions, which would be significantly reduced by switching to hybrid electric vehicles. Noise reduction and improvements in occupational health protection - highlighting pollutant emissions in the vehicle hangars in particular - are very important aspects of this project. Other goals include improving technical availability and improving driving safety and dynamics. Since the eLHF is a hybrid and thus additionally an internal combustion engine will be installed, it is important that a disaster-proof construction is present.

Requirements for the hybrids are that the mission service can be mapped to more than 80 percent in a purely electrical operating mode. This should be ensured by a built-in battery storage that can be charged in the standby time of the vehicle on the respective fire station via a fast charging system. This battery storage is thus intended to ensure that emergency drives and the operation of the entire extinguishing technology are electrically secured.

Innovation partner and temporal implementation of the eLHF

In addition to the Competence Center for Innovative Procurement (KOINNO), the Berlin Agency for Electromobility played a key role in the consultation phase of the project. For the technical implementation of the project, the Berlin Fire Department as well as the company Rosenbauer are responsible. Mr. Michael Friedmann, Head of Group Strategy, Innovation & Marketing (Rosenbauer) explained in a short presentation the goal of the innovation partnership from the development to the embedding of the vehicle into real operation.

After the project tendering phase officially ended on 15/11/2018, it is now time to engage in the development, construction and delivery of the project vehicle in the second phase of the project. At the press conference, the Innovation Partnership between Mr. Ronald Reisinger, Managing Director of Rosenbauer and Dr. Ing. Karsten Homrighausen, Landesbranddirektor Berlin, was contracted.

Further phases such as the procurement and commissioning of a suitable charging infrastructure and the integration and testing of the project vehicle in the emergency service are further milestones. The schedule of the project envisages that the development, manufacturing and testing of the project vehicle will be completed by the 3rd quarter of 2020. The same applies to the procurement and installation of the charging infrastructure. Subsequently, a one-year test phase from the beginning of 2021 should provide first insights and minimize potential errors Perspectively, the conversion of all extinguishing and auxiliary power vehicles with an alternative drive is the goal.

With this project, the Berlin fire brigade is considerably advancing the research and development of electric drives for fire-fighting vehicles. In addition, they take responsibility for climate and environmental protection.

All information about the project can be found here.